A little over a year ago I revealed Elliot’s nursery. And I have to say it makes me a little sad to look back at photos of a much simpler time (haha!). Seriously though, after only a year it’s amazing how fast my baby turned into a full-blown, rambunctious toddler!

This whole room refresh started because a few months ago Elliot decided that it would be fun to test his strength and start climbing out of his crib (too soon!!!). And since I’m trying my best to be a good mom and make sure this kiddo doesn’t hurt himself I felt forced to convert his crib to a toddler bed. No broken bones over here! It took a few hours with an allen wrench, but I figured out how to take the front section of the crib off and add the toddler rail. 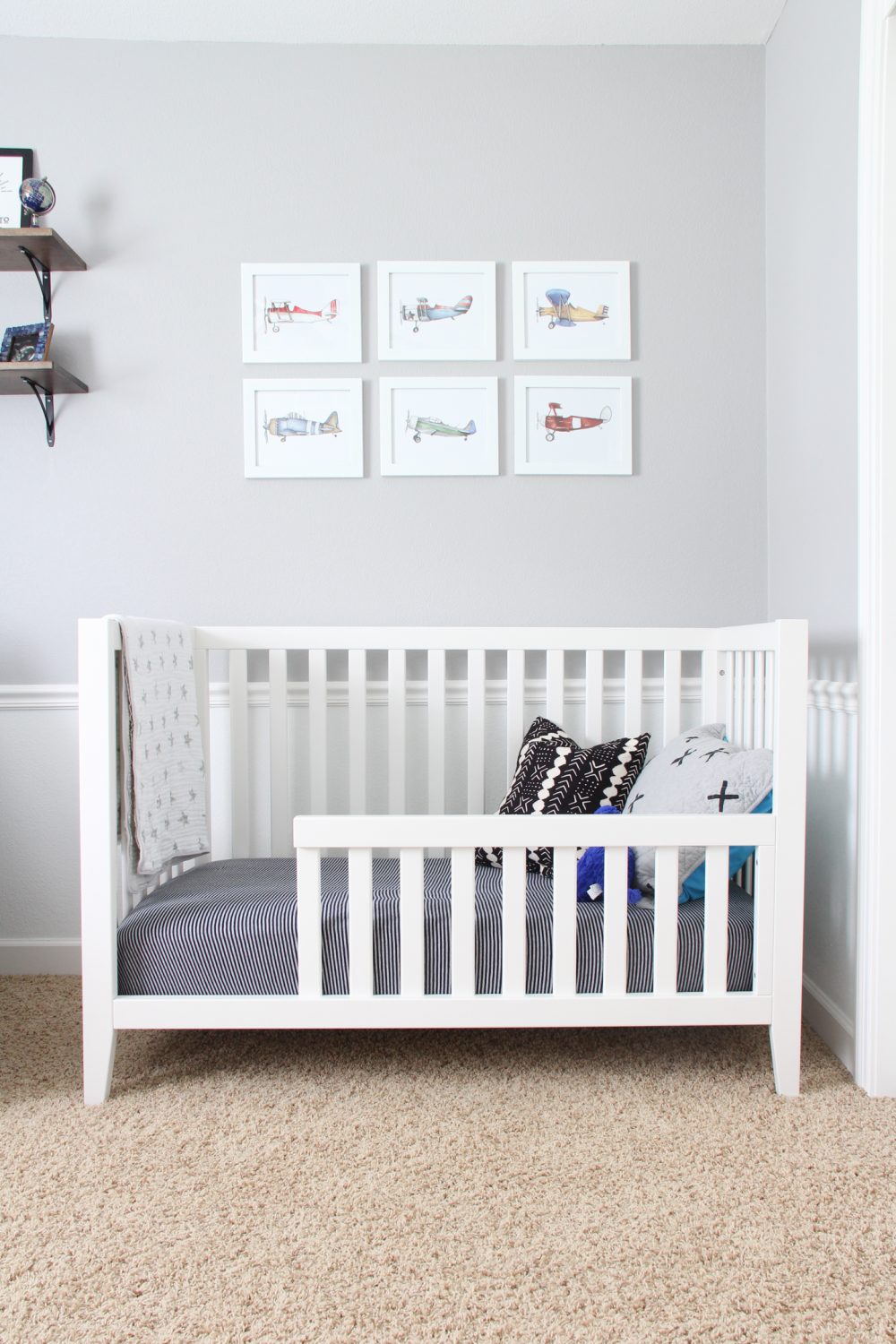 We also refreshed his room with some new bedding. A stripped crib sheet, a very soft blanket, and some new pillows did the trick. 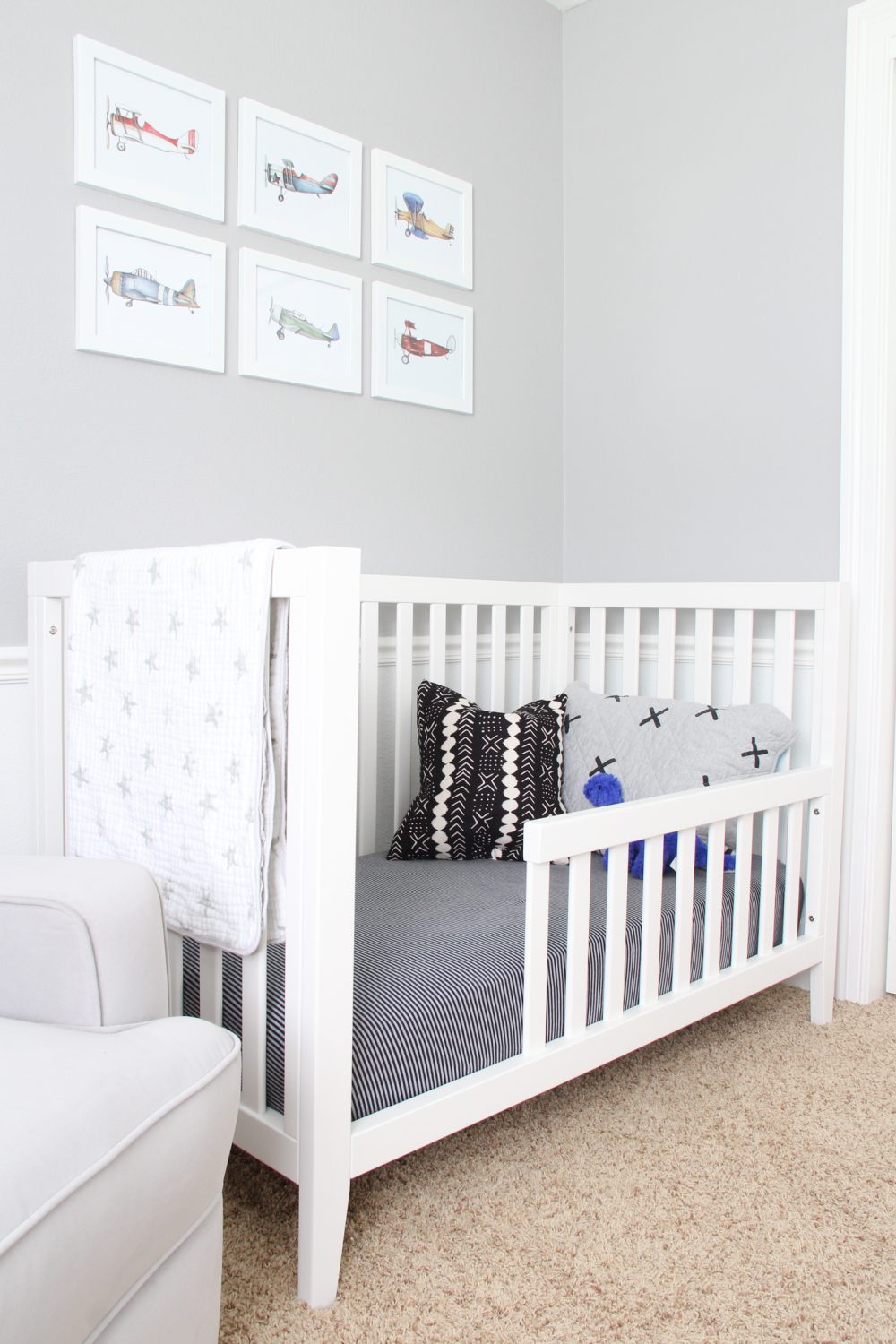 He’s still not talking very much but one of his favorite words is “dinosaur”. So obviously, he’s loving his new stuffed animal dinosaur to snuggle up with. 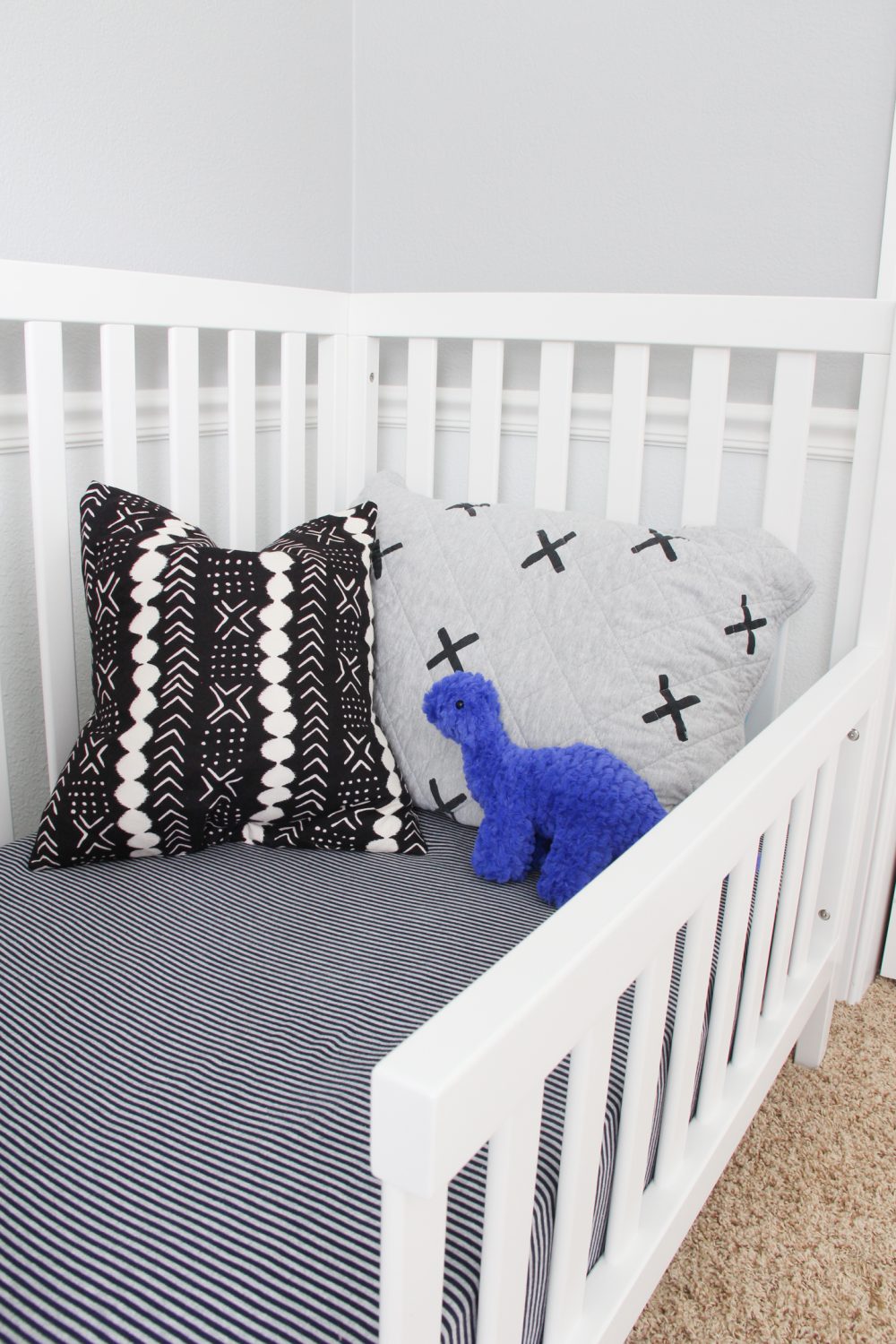 I also decided to sprinkle some new art into his room. I quickly made the ABC’s art in photoshop and had it printed at Costco ($3.99 for a 12″ x 18″). And the blue finger painting is actually an Elliot “original”. He doesn’t always like to make art, but when he does I proudly mat and frame it! 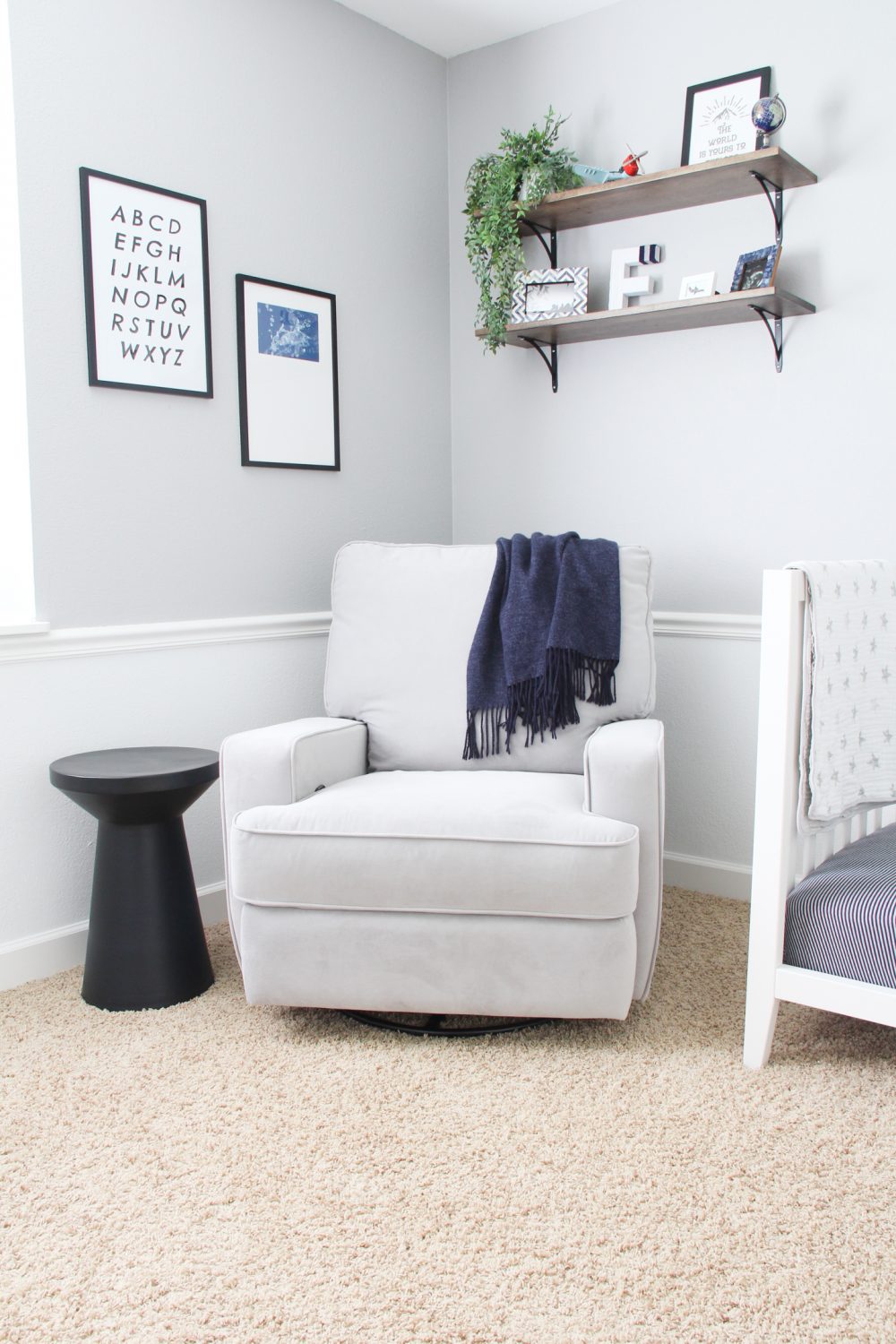 Then on the opposite side of the room he still has the vintage dresser that we converted into a changing table. But I added a new piece of artwork above that I also got printed at Costco. It was $9.99 for a 20″ x 30″ (the largest size they print).

I’ve been using Costco’s printing services a lot lately and I have to say it is actually pretty good quality for the price. I just really wish that they could print as large as 24″ x 36″. I love large art and this would save me so much money! But for now we can make do with the 20″ x 30″ size. 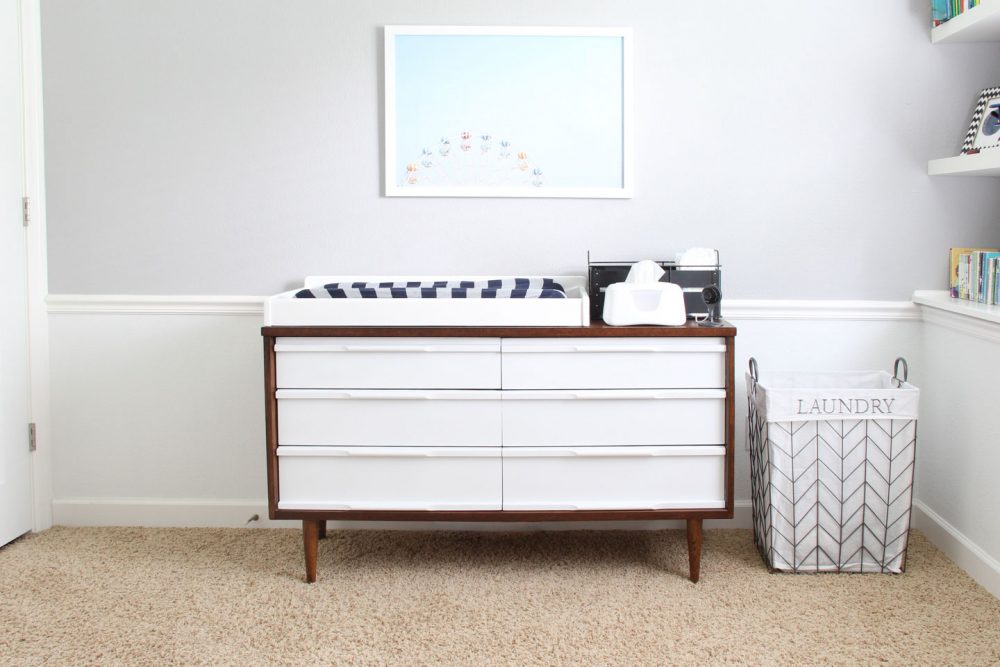 Naps have been a little harder for Elliot lately and so one week I got pretty ambitious and decided to make a custom blackout roman shade for his room. After watching this really helpful YouTube video at least 20 times I was able to figure out how to sew and assemble the whole shade for his window. It was very confusing and a little tricky to acquire all the pieces needed to build the shade, but I’m happy I took the time to learn how to make these. I have a feeling there’s about 3 more roman shades I need to make for the house now.

And honestly, even though it’s a DIY project the shade slides up and down really well and works perfectly! I really love it. The blackout fabric is amazing and lets practically no light through. The only thing is I’m not sure how much this whole thing is actually helping with nap time (the original reason I started on this whole roman shade journey). But I will say it looks much better than the white blinds we had in there originally. 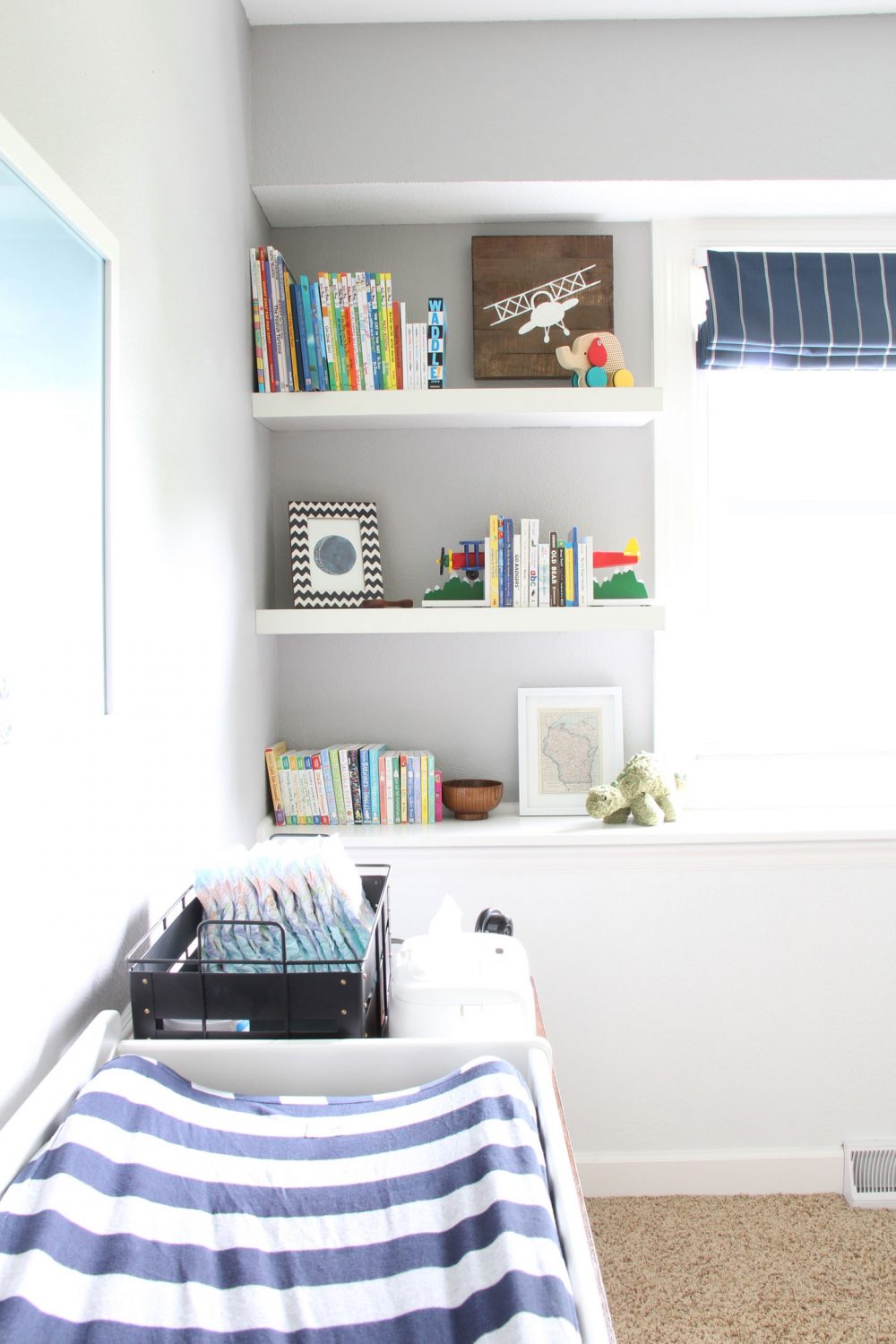 Our Built In Bookshelves