Let’s just say we have learned a lot this past year about renovating a house. One of those lessons has been in deciding when to hire out work and when to do it ourselves. Sometimes it makes a lot of sense to do a project yourself. Especially when you are looking to keep labor costs down and if the price of screwing up is fairly low.

But sometimes, projects can get really tricky and complicated and that’s when it’s better to hire a professional rather than attempt to do it yourself.

Case in point: our floors.

This whole flooring project first started going wrong on an impromptu trip to Menards where we probably needed just one little thing. But instead we stumbled across some laminate for $.88/sq ft (plus they were having a special promo which included the underlayment for free!). It sounded almost too good to be true so on a whim we scooped up a bunch of boxes of this super cheap laminate, plus the free underlayment, and decided we would try to install the flooring ourselves. The stained, awful carpet in the house had been driving us crazy for months! #saynotocarpet

We demoed the closet and removed all the carpeting and padding from the room. And after a lot of YouTube research we finished laying laminate in the master bedroom and closet. I talked a bit about the flooring install in this post.

But I must say, for our first attempt at laying flooring we were fairly successful. Not perfect, but definitely not the worst job out there.

After living with our choice for a few weeks we realized that the new laminate was not cutting it. It was very noisy and not as attractive compared to other choices we were finding out there.

Plus the thought of installing this same laminate throughout the rest of the house was not appealing to either of us. The noise would not be good with the two dogs clickity-clacking on it all day. It was pretty clear that we needed a better quality underlayment.

Plus, the wood pattern was a little too busy. And the material was very obviously cheap and difficult to work with. We had a very hard time figuring out how to get around doorways and tight spaces. And next up on the install list was the hallway and more closets!

So, we decided to cut our losses, find a different laminate option, and hire the job out. The only downside was that a lot of our other projects were put on hold because of this decision. But in the long run I think it was worth it to have the pros come in and do the job right.

It took some time to get bids from contractors and to source a laminate that would closely match the existing flooring in the kitchen. I could probably write a whole post about my frustrations with trying to match existing laminate that has been discontinued by the manufacturer. Stay tuned for that one.

But regardless, we made it through! And a few weeks ago we finally crossed the finish line. The floors are now installed and all is well over here. Well, at least for us humans. The dogs are still getting used to it. 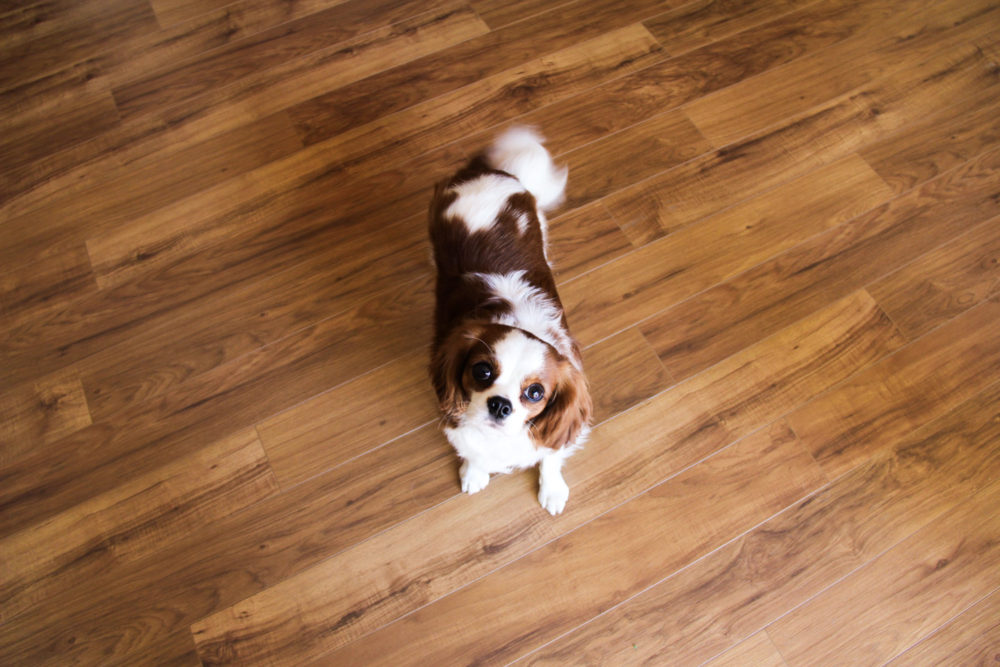